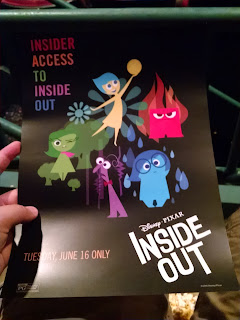 Pixar's back! From a two-year hiatus from the theaters that included some shorts and lots of future movie annoucements. But here they are, back on the big screen with Inside Out. And if anyone out there was worried that Inside Out would continue the (BS) recent Pixar tradition of sub-standard films, boy were they eating crow. Inside Out is a perfect addition to the Pixar filmography and, in my personal opinion, one of the top three films they've ever produced. From literally the Disney logo on, you are thrown into this amazing world that Pete Docter, Ronnie del Carmen and the rest of the crew created. We are first introduced to Joy (Amy Poehler), who, for being the literal embodiment of happiness, is one of the most conflicted characters Pixar's ever created. Her struggle to maintain order in Riley's head and her conflicting opinions with those of Sadness (Phyllis Smith) are what drive the film and keep the action moving forward. Going back to Sadness, she might be one of my favorite Pixar characters ever. For being one solitary emotion, she has a lot of underlying traits that make her wonderful. Riley's other emotions are great characters too, if not super developed like Joy and Sadness. Fear (Bill Hader) has some great moments as he and the other emotions try to run HQ without Joy around. Anger (Lewis Black) has some great moments, especially regarding the running gag of the gum commercial. Disgust (Mindy Kaling) is also pretty great. We can't forget the real star of the movie, Bing Bong (Richard Kind). For someone barely in the marketing and with such a mysterious aura surrounding him, Bing Bong might be the best character in the film. He has probably the most emotional scene in the film (which I won't spoil) and, other than Anger, some of the funniest moments in the film. He's great. The human characters, though, are what make the film so powerful. Riley (Kaitlyn Dias), her mom (Diane Lane), and her dad (Kyle MacLachlan) bring a personal connection to the film that helps it really hit hard with audiences, which helps make it so emotional. And by emotional, I mean EMOTIONAL. For a film about emotions, the one you use the most while watching is sadness. Seriously, Pete Docter really loves leaning on the feels card. With Boo and Sulley's goodbye in Monsters, Inc., the Married Life and Things We Did sequences in Up, and now this, he's easily the best over in Emeryville at tapping into raw emotions. The animation is just lovely. It's got a really nice cartoony feel when we're in Riley's head, and outside it features the best human animation I think Pixar's ever done. There's one scene where the animation styles change and it might be the single most amazingly animated sequences Pixar's ever done. The score is amazing too. Michael Giacchino is now 5 for 5 at making fantastic scores. The score helps egg on the emotion too, much like it did for Up. The lesson of Inside Out might be the deepest, and yet simplest, of any Pixar film ever made. I won't tell you what it is, you'll have to see for yourself.

The whole stage for Inside Out is set up by the short Lava, directed by James Ford Murphy. It's a fun little short. The animation is unbelivable, not as great as The Blue Umbrella, but pretty damn good. The person I sat next to when I saw the movie kept snickering at the forced lava pun, which is pretty cheesy. But aren't a lot of cute things incredibly cheesy? The trailers I saw (that I can remember) where The Good Dinosaur and Minions. There were others, but I forgot. Not a big reaction for TGD, but whatever I'm excited. Minions however got huge laughs for almost everyone except me and my sister. I don't get the minions. Sorry, but I liked them better when they were green, three-eyed, and praising a claw.

So, moral of the story is Inside Out is great. Like really great. It's a shame it'll probably be the one to break the string of number one debuts for Pixar films. Stupid, sexy Chris Pratt. Anywho, just go see Inside Out. It really is worth it. You'll laugh, you'll cry, you'll cheer. I know I did. 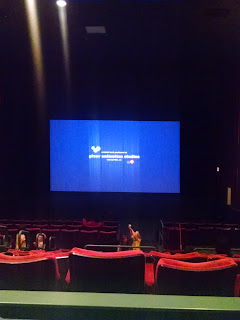